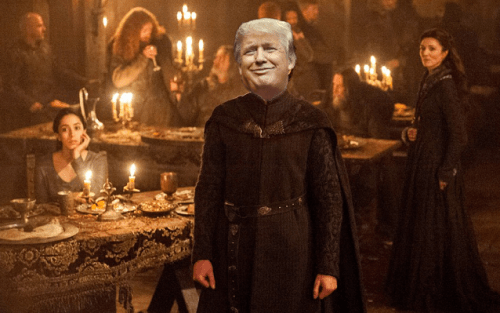 What could go wrong?

Ted Cruz and John Kasich have announced that they wish to cease hostilities with Donald Trump immediately, and as a token of goodwill have invited him to a wedding at the castle of Walder Frey.

This gesture is especially symbolic as Frey is known to be entirely neutral, above board and not at all given to evil murderous plots.

“We’re very excited about Trump coming here to celebrate with us,” announced Cruz this morning. “We hope to see him very soon – all his supporters can come and get extremely drunk safe in the knowledge that nothing bad will happen.”

“I’ll be wearing my best chain mail suit to mark the occasion.”

Trump seems to be intent on ignoring advice that attending the wedding might be a risky move, saying: “Hey, I know politics is a pretty cut-throat business, but I’m sure I can keep my head.”

“Now, that wall they’ve got up in the north – that gives me an idea…”