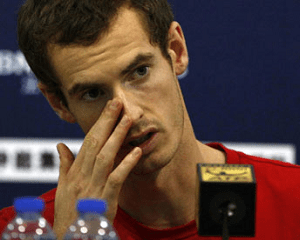 Andy Murray, with his trademark look of despair.

Andy Murray felt an immediate pang of regret, after giving away his tennis racquet to one of his 3 million Facebook followers.

“I’ve just realised that I’m going to need it again”, said Murray. “It’s quite important, because it’s what I use to hit the balls.”

Murray spent the afternoon trying to buy it back on ebay, but was shocked at how much it was now ‘worth’.

Current racquet owner Terry Hodges explained why it meant so much to him.

“I’ve always been a Murray fan, I’ve followed his career closely from his amateur days, so to win this was like a dream come true. I’ve set the reserve at £5,000.”
END_OF_DOCUMENT_TOKEN_TO_BE_REPLACED

Comments Off on Andy Murray regrets giving away racquet: ‘I’m going to need it tomorrow’