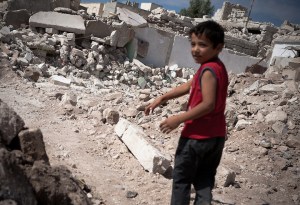 Syrian children are very upset that pictures of them injured and covered in rubble have caused such distress to 66 pro-bombing Labour MPs.

“It’s just awful those MPs feel bullied and upset as the result of my thoughtlessness in going to the playground with my brother and sister just before the missile hit” said Ahmed, aged 11, as he wiped a tear and some bomb dust from his eye.
END_OF_DOCUMENT_TOKEN_TO_BE_REPLACED