Protest against Orgreave enquiry decision charged down by mounted police 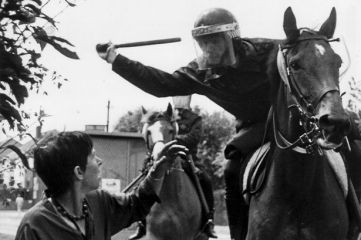 Brave PC defends himself against a woman armed with beads

A group protesting Amber Rudd’s decision against an Orgreave enquiry has been flattened by a mounted troop of baton-swinging police officers.

Today’s retro cavalry-charge was “a limited, proportionate response and rather nostalgic,” a South Yorkshire Police spokeswoman explained, adding “anyway one of them looked a bit like Arthur Scargill, so they were asking for it. END_OF_DOCUMENT_TOKEN_TO_BE_REPLACED