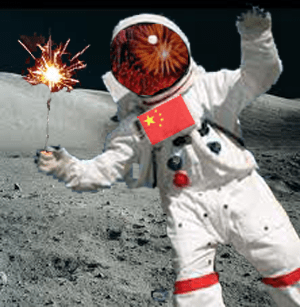 China may one day put a pyrotechnician on the moon.

A row has broken out between the US and China over a Christmas Day Special Event which was meant to be a surprise for everyone on Earth at Christmas.

The diplomatic row comes after NASA spotted China’s lunar robot placing Roman Candles around the edges of craters on the moon’s surface.  China has complained that NASA just wanted to spoil the surprise because they didn’t think of it.

“The US hasn’t bothered with the moon for many moons,” said Yun-Tsi Tao, head of the Chinese Space Agency.  “Now, all of a sudden, just because we put a robot up there, they’re all goggle-eyed and spoiling the surprise of the Supreme Leader’s gift to the rest of humankind at Christmas, a firework display on the waning gibbous.”

There were fears that the row could escalate after NASA observed the robot flatten the US flag placed on the moon by Neil Armstrong in 1969.  But the situation was defused when the robot carefully put the flag upright again, apparently of its own volition.  “We thought it had a moral conscience for a minute,” said NASA, “but, no.  It nailed a Catherine Wheel on the flagpole.”

NASA has said it had no idea the fireworks were meant to be a surprise, claiming that most people could see what was going on up there with the naked eye.  “I mean, I was looking through a pair of home-made binoculars that my 7-year-old made from a plastic kit,” said NASA spokesman Flt Lt Denver Colorado, “and I had no trouble reading the name of the factory printed on the fireworks.  Boy, they’re big rockets!”