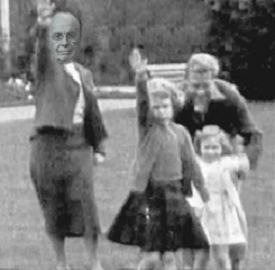 Buckingham Palace has been forced to defend the Queen after it emerged that pictures of Her Majesty had been published in The Sun newspaper, owned by the evil tyrant Rupert Murdoch.

Members of the public were shocked today to find out that Queen Elizabeth had appeared in the reviled pages of the detested publication, forcing palace officials to hastily issue a statement insisting that the appearance of the photograph was an innocent event which had been blown out of all proportion.

“The photograph was taken a long time ago,” claimed a spokesperson, “When many people just didn’t realise how evil The Sun really was. Being a naive 89-year-old, the Queen simply didn’t understand what it meant to be linked to Rupert Murdoch, and we would like to assure everyone that she is not, and has never been, a grubby far-right bucket of sleaze. There are plenty of other people in the royal family to take care of all that.” END_OF_DOCUMENT_TOKEN_TO_BE_REPLACED