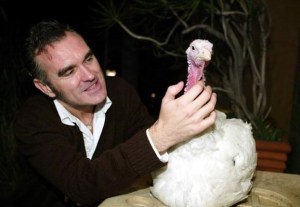 Morrissey caught in the act

Morrissey’s animal rights crusade may all be an act as allegations emerge he’s a chronic chicken strangler and monkey spanker.

Morrissey, who as lead singer in the Smiths sung the vegetarian anthem ‘Meat is Murder’, has publicly and noisily advocated for animal rights, but it seems behind closed doors the pop icon is not averse to abusing animals for his own selfish pleasure.
END_OF_DOCUMENT_TOKEN_TO_BE_REPLACED

Tagged as Meat is Murder, Morrissey