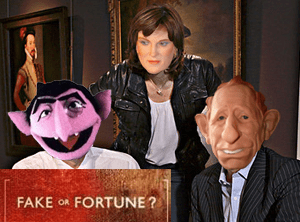 The nation’s sense of trust in the BBC has reached an all-time low, following the revelation that its flagship art valuation program Fake or Fortune is itself a complete fake.

The program features a gullible member of the public who has bought a work of art by a famous artist at a massive discount because the work has not yet been authenticated. It’s Fiona Bruce’s job to trace the work’s history across Europe and establish the all-important provenance. The gullible owner is excited by the prospect of a genuine work worth millions, but ends the program in tears, when an expert points out that Chagall never signed his name with an S.

An investigation by the Broadcasting Standards Authority, however, found that the program was made up and none of the characters were real. The findings were that the program was filmed entirely in a studio in Manchester and shots of Fiona Bruce outside the Louvre in Paris were created by back projection, using a look-alike actress, with her voice dubbed on afterwards by Russell Crowe. And the works of art were all stage props, made in the BBC’s workshops.