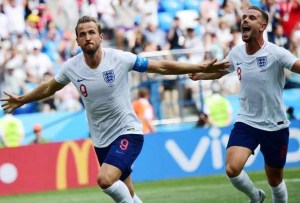 England football fans are panicking that their 4 yearly bout of misery is turning totally pear-shaped and they might just win the World Cup.

Fans had to endure being ahead until just before the end of normal time when a Colombian header gave hope they’d suffer a humiliating exit. Extra time revived hopes as England clinically steered the ball into the direction of their own net. Unfortunately those hopes proved to be in vain after England squandered a glorious chance to lose the penalty shootout after Henderson looked to have made them safe with a tame miss.

Gavin Mitchell was one of many local fans to be dazed after the result. “Once it went to penalties, I thought we had it in the bag. I mean they had Southgate to tell them to kick the ball softly, just to the goalkeeper’s right. How could they screw it up so badly? Winning the shootout shows that the boys have no respect for tradition.”

Despite the lack of heartbreak, fans tried to stay positively negative. “Maybe we can nick an own goal against Sweden” said Dominic Delaney. “Or perhaps a few of the boys might fail a drug test.”

“I know I sound a bit desperate, but a repeat of 1966 is unthinkable … I mean people were happy for YEARS.”