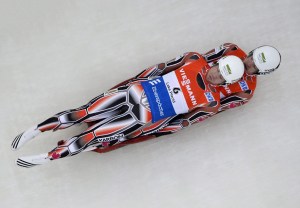 A Harold man managed to fulfill his fantasy of sliding down a ice slope in a giant cheese sandwich and, as a happy by-product, represent the UK at the Winter Olympics in the double luge event.

Insurance assessor Alan Atkins said it was just by chance he found his perfect sport.

“I answered an ad for ‘lube trials’ so I expected things to be slippery. But it was still a surprise to hurtle down a steep ice slope at 90 miles an hour. An exhilarating surprise though as I’ve always had a thing about sliding down a slope as a giant cheese sandwich ever since catching a glimpse of a ploughman’s at the Squirrel Licker’s Arms when I was a boy” reminisced Atkins fondly.

Atkins, who competes with fellow Harold man Dominic Delaney, said it worked out well that he got to be the cheese in the sandwich while Delaney took the role of the bread.

“Dominic likes to be on top, and I just love being wedged in between, so it works out perfectly. We’re like the ploughman’s version of Torvill and Dean, only I don’t look up at Dominic’s underwear.”

Atkins explained that having found their perfect sport, he and Delaney prepare thoroughly for each run.

“Dominic makes sure his wholegrain rye body suit is on nice and tight, and I do the same with my thinly-sliced cheddar suit. Then we smear ourselves in butter, liberally apply Branston pickle, and off down the slope we go.”

Atkins said the best thing about being in Korea was being among so many like-minded people who share his fantasy of sliding down an ice slope in a giant cheese sandwich.

“But there are some perverts here” Atkins whispered. “There are people who would you believe get excited about hurtling down the slopes with giant chopsticks strapped to their feet. And some other OCD types who get a sudden furious urge to do the sweeping every time they see a stone slide across the ice.”