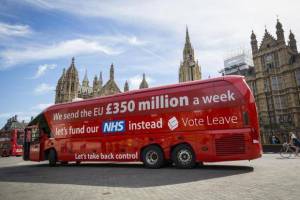 As a second vote on whether or not to shoot the country in the head, foot and anus just to get blue passport covers looks a little more likely – “EU says door is open for Brexit decision to be reversed” Guardian. “All grown up: child  fair game for our paps now she’s hit sixteen” Daily Mail – Leave supporters are casting their swivel-eyes around to find an even bigger lie to write on the side of a bus just in case it’s needed in a future referendum.

“It’s a big challenge,” said a staunch Leaver who gave his name only as Boris. “The NHS one was such a corker, still can’t believe anyone took it seriously, so we need something equally or ideally even more outlandish. Drafts so far include: ‘Brexit: More effective than Viagra’ ‘Brexit: The UK won’t just be all white after a snowstorm (wink, wink)’ and ‘Brexit: Everyone’ll stop thinking your obsession with WWII is weird’.

“Or I suppose we’ll simply go for a tug on the old heartstrings and promise voters what they want most of all with “Brexit: Maggie will come back’. See you on the hustings!”