New UKIP leader vows to stay on until Christmas, “with a little bit of luck” 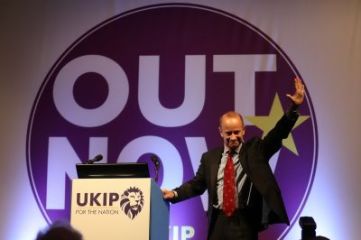 Phew, Bolton remembers to use his left arm when saluting the troops

Henry Bolton has seen off the challenge of better-known racists to become UKIP leader.

He says he’ll hang on until 2018 if at all possible and if his luck’s in, dashing hopes there’d be enough leaders within 12 months to form a five-a-side charity football team.

What do we know about Henry Bolton? Born in Kenya [are you sure? check this before publishing Ed.], Bolton moved to Britain to study but quickly realised other immigrants might want to compete for the very same jobs he hoped to have.

So, after graduating he served in the army, learning how to shoot any other African people who might try to invade the UK; from there it was a short step to signing up to UKIP.

Bolton now lives near the south coast where he can keep an eye on the English Channel.

Former serial UKIP leader, Nigel Farage said he was delighted that Henry Bolton was following in his own footsteps, by being married to a suspiciously foreign sounding woman, Tatiana Smurova-Bolton.

Comments Off on New UKIP leader vows to stay on until Christmas, “with a little bit of luck”