New ‘grasping prosthetic hand’ is actually based on Philip Green 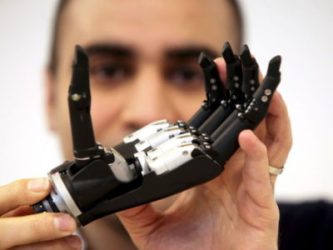 Scientists made the prosthetic hand more lifelike than the original

“Once it detects stored wealth, say pensioners’ life savings, the prosthetic limb can grasp everything not actually nailed down, then hide it in a Monaco bank account held in trust by the other hand.”

Dr Guest says that in operation, the wearer simply points the camera at an object in which they’re interested. If it belongs to someone else, the arm muscles are instantly tensed and the prosthetic controller automatically calculates its value. “If it’s hundred of millions, then bingo, the device adopts the correct grip to silently pick it up and slip it into the wearer’s back pocket”.

Dr Guest’s team are now refining the software so that the device functions undetected over a 24 hour cycle “Up to now it has worked best under cover of knight.”