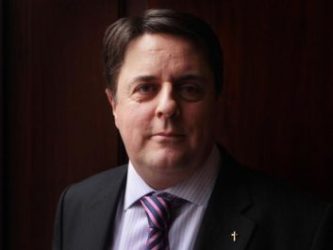 Griffin spoke in glowing terms of the growing ”nationalist emigre community” in Hungary, where he’ll move to later this year. He will continue to be politically active though, campaigning for less immigration and stronger national borders.

Laws of quantum physics were suspended yesterday, as Oxford English Dictionaries failed to fit this proposition into Einsteins general theory of relativity. A temporary fix saw the word ‘irony’ removed from its on-line editions but when linguists tried re-booting the system, it was found to have lost all meaning.

Former BNP leader Griffin has every character flaw of a man you’d avoid being stuck on the same table with, at a distant cousin’s wedding. The odious racist and serial bankrupt brings to the current immigration debate all the forensic logic and intellectual rigour that stunned Question Time viewers in 2009.

“I’ve already been criticised by the usual suspects who, as ever, fail to understand the simplest of facts. I won’t be “an immigrant” in Hungary because I’m not immigrating, I’m emigrating.”

Comments Off on Irony implodes: Nick Griffin to emigrate