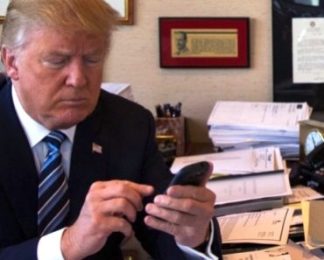 “How do I say I’m sorry without saying I’m sorry?”

Donald Trump has at last learned the US security agencies he’s slagged off are the very people who shield him from idiots even more deranged than his own supporters.

“Goddam! Really?” asked the orange pussy-grabber “I thought Kevin Costner and Clint Eastwood were doing it. And that other one. The big black guy who said he’d take a bullet for Kevin Kline. You remember, when Kevin was President for a few months, back in the 90s.”

Only a few moments later, Mr Trump took to twitter to express his unqualified admiration for the brave men and women of Intelligence and ‘just to check’ if the dudes wearing dark suits and sunglasses standing outside Trump Towers were part of his new security detail.

Former CIA director James Woolsey, who quit as Trump’s transition team intelligence adviser yesterday, said “Our best guess is that they’re KGB but what would we know? Why not check on Wikipedia, or call Julian Assange?”

Filed under US Elections

One Response to Oops. After learning CIA also does his security, Trump tweets “I’m a big fan”