Britain First even fails to become a banned organisation 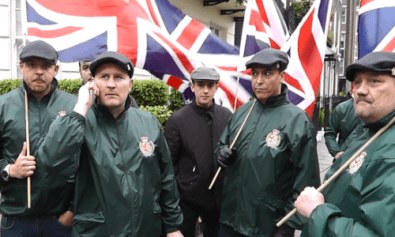 It’s a phone Paul. You just have to say “Hello, this is Paul.”

Morons-on-a-mission, Britain First are seemingly so useless they’ve even failed to come to the attention of Amber Rudd and get themselves banned.

The knuckle-dragging fuckwit ‘party’ has been soliciting funds for some days, on the premise that they were about to be banned and needed cash for their legal appeal. With Poppy scam season over, Biffer Central is on the lookout for alternative income streams, before their traditional spring fundraiser; using images of a murdered soldier against the family’s wishes.

Shortly afterwards, Golding stepped aside in favour of his deputy, the pretend-lawyer Jayda Fransen, and the government’s get-tough on extremism policy offered her a brief opportunity of fame.

Sadly for Fransen, Britain First, and their victim complex the Home Office concluded that of its 2 million facebook followers, very few had any idea what they stood for.

“Fifty three, to be exact,” said a Home Office spokeswoman “including ‘three rather mangy cows, a dachshund named Colin, and a small hen in its late forties’.”