UKIP members shocked to find Paul Nuttall is a scouser 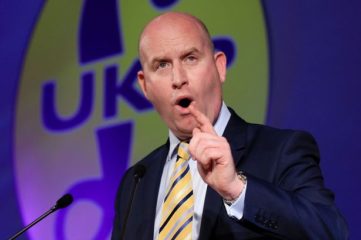 Thousands of horrified UKIP members only found out today, as they listened to Paul Nuttall gave his acceptance speech, that they’d voted for a scouser.

“My god, I thought he’d be another Nigel.” said Alec Fairchild, a UKIP member and pub bore from Harold. “Well-off, private school, a commodity broker in the city. But this chap sounded like a football player; or someone in a Channel 5 documentary about benefit cheats.”

“We’d already had a filly, for a couple of weeks,” explained Fairchild, warming to his task, “so I didn’t vote for Suzanne Evans. Anyway, she always looks like she’s chewing a wasp and as I hadn’t heard of the other chap I ticked Nuttall. To be honest, I struggle with a ballot paper with more than two options; ‘Leave’ or’Remain’.”

“The wheels have rather come off the UKIP bus since the referendum” added an uncharacteristically thoughtful Fairchild, “and I’ve now got a damned good idea who took them.”