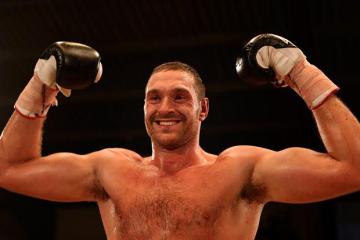 Celebrity racist and well-known misogynist, Tyson Fury, has signed up for the UKIP leadership race, claiming he has the firepower to despatch Mike ‘Right’ Hookem in the early rounds.

“Mike was impressive against barrister Steven Woolfe. What a ridiculous name by the way, with a name like Woolfe I thought he’d be a bit tasty but he went down like his name was Poodle.”

“I’ve never actuallly fought a barrister myself as I don’t drink coffee, although I have punched a few barmen in my time.”

Supply leader Diane James admits she just wasn’t up to the physically aggresive style of democracy that male Kippers practice.

“To tell the truth, I was surprised when I found a gumshield, punchbag, and pair of boxing gloves in my new office at UKIP HQ last month. And the jockstrap. It all makes sense now.”