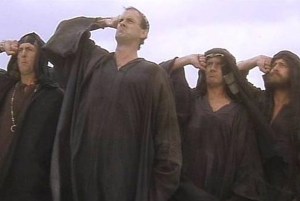 The Judean People’s Front and the People’s Front of Judea haven’t seen eye to eye for over 2,000 years, but both groups agreed the Tories and Blairites are far greater threats than Pontius Pilate and the Romans ever were as they threw their combined weight behind Corbyn.

“We want to be led to the Promised Land, not a zero hours contract at Poundland” said People’s Front of Judea spokesman Reg Jones. “Jeremy’s the man for the job, and Theresa, well she’s a SPLITTER!”

Judean People’s Front’s Alan May agreed, saying “Jeremy may or may not be the Messiah, he might be just a very naughty boy. But he’s still better than Theresa, Philip, and Pontius Boris. And he’s not Tim Farron or that UKIP fantasist guy.”

Obtaining all the Judean endorsements didn’t stop Corbyn once again get crucified by the press. The Guardian in particular seems to have no shortage of nails.