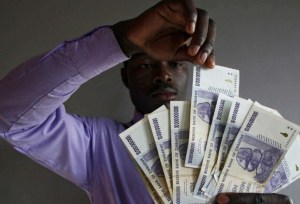 News that the Zimbabwean dollar appreciated 1,483,000% against the pound has generated a flurry of inquiries at Harare travel agents.

“I’ve always wanted to visit Britain but having to save 4,945 years salary to afford the airfare and hotel put me off” said Henry Mallari. “But now I can pay for the holiday with loose change I found behind the couch.”

Mr Mallari said he was very excited about his trip, but a little worried that any pounds he bought would be worthless by the time his holiday ends.

“I’ll obviously take some Zimbabwean dollars with me, as the locals will be desperate for some hard currency. But I will change a few pounds, to use in the toilets, for tips, and such like, as long as I can fit all the notes in my backpack.”

“I might even buy some shares while I’m there, they seem to be going cheap as well” said an excited Mr Mallari.

Mr Mallari said he was a bit apprehensive about British food but assumed that in the next week or so, a number of Zimbabwean restaurants would open to cater for the influx of tourists wanting a little taste of home.

Comments Off on Zimbabweans delighted at prospect of cheap UK holiday