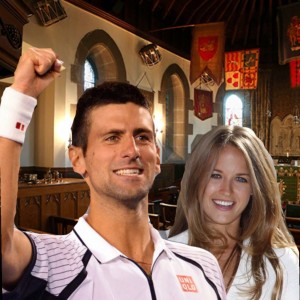 Unhappy times past, when Andy lost his wedding to Djokovic

Andy Murray has apologised for letting down his fans again, after unexpectedly losing the birth of his daughter to Novak Djokovic.

Although this was the first time Murray had made it through to the final round of a pregnancy, he was relaxed and happy before the event.

“I’d played well in the pre-natal classes” said the Scot. “Obviousl, Novak has won at least one previous birth, so has the experience, but my coach felt I had the game and the temperament to become a parent at the first attempt.”

As top-seed, Murray wonders if he may have been over-confident going into the maternity ward and admits he didn’t even see Djokovic before the Serb emerged from under Kim’s green gown, carrying the baby aloft.

“It’s a bit of a blow for the whole family.” said Murray “We were going to call the baby Jamie or Judy but apparently Novak’s going to give her a Serbian name; Radovan or Ratko are favourites.”