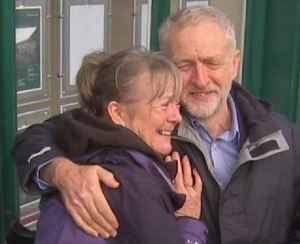 Jeremy Corbyn has hit the music scene with what critics say will be this year’s Christmas Number One.

A fabulous video now out of the kindly pensioner singing Happy Birthday Dear Katie has taken the UK by storm.

The video was tastefully shot in Cockermouth, showing Jeremy and Katie hugging in the cold air, surrounded by festive sand-bags.

Happy Birthday is Corbyn’s follow-up to his much-acclaimed National Anthem released in November.

“But the earlier work was not at all main stream,” said Dr Phillips.  “Okay, it was meant to be ironic, but it was far too much like John Cage’s 4:33.”

Not everyone is impressed with Happy Birthday Dear Katie.  Archbishop of Canterbury Justin Welby tweeted “@JeremyCorbyn Jesus!  He was called Jesus!”

And David Cameron was furious during PMQs when Corbyn asked him whether he had any plans for Cockermouth this Christmas.