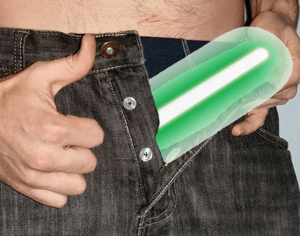 Is that a Yoda in your pocket? Or do you have a serious medical condition?

Disney has admitted that their Star Wars franchise may have cocked up, as it rolled out a new light saber condom.

Available in Jedi Green, or red for those who want to explore the dark side, the prophylactic is lubricated to reduce science friction.

But consumer groups have complained that the sheath is a wholly inappropriate way to get inside fans and build excitement about the franchise.

“I must admit, I was nearly as sceptical about this as I was about the ‘Battlefront’ game”, said life-long Star Wars fan, Jeremy Hostage.

“It was a lot of fun making ‘wooshing’ noises, while I had a mock fight with my friend. Even though my mum didn’t really understand what we were up to.”

Perhaps fittingly, the product has now been withdrawn, making it even more collectible than a 1978 vinyl-caped Jawa.

“I’ve got a couple of unopened ones left, I’m sure they’ll be valuable in a few years”, said Jeremy. “Although in truth most of them are unopened; it’s not like any of us serious collectors have girlfriends.”