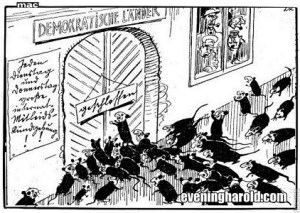 Goebbels’ famous propaganda movies and posters also pictured Jewish people as fleeing rodents, and according to German lawyers the Mail is guilty of blatant copyright infringement.

“It’s not that we don’t like what they’re doing,” explained a Goebbels family member at a press conference this morning in a Munich beer-hall. “We think Josef would have been right behind them, it’s more the principle.”

Daily Mail cartoonist Mac was quick to defend his cartoon, saying: “I’ve never copied anyone, it’s all blatant nasty lying bullshit – which I have to hold my hands up and admire, to be honest.”

“If I’ve been influenced in any way by Nazi propaganda, that would be purely subconsciously, an innocent result of spending many happy days surrounded by Nazi memorabilia, poring over Mein Kampf into the late hours. A bit of that stuff is bound to sink in.”

In a further twist, it emerged that representatives of current neo-Nazi parties were “closely studying” the rest of the Daily Mail’s content.

“That’s not because we’re thinking of suing or anything,” explained one fascist, “We just think it’s a bloody good read.”