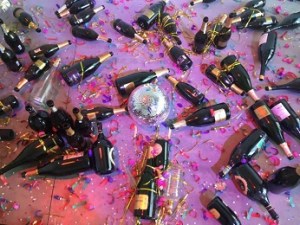 But is it rubbish?

Cleaners at a museum in Italy were left red-faced today after mistakenly leaving a huge pile of mess from a party, after mistaking it for a modern art installation.

The empty champagne bottles, confetti and pieces of paper did look like a confronting modern exhibit meant to represent the decadence of 1980s Italy, characterised by hedonism and consumerism, but were in fact merely a pile of old crap.

Staff at the Museion Bozen-Bolzano in northern Italy posted identical before and after pictures on their Facebook page yesterday morning explaining the situation.

The museum’s curator, Otto Burk, explained that the mistake would soon be rectified, after the cleaners volunteered to come in on the weekend and painstakingly put the rubbish in the bin.

“It is an easy mistake to make,” insisted Burk. “We do in fact frequently feature huge piles of bollocks masquerading as art, so it is understandable. A pity that this has happened every day this year, but the cleaners, once they are told of their mistake, always come in on Sunday at double time.”

This is not the first time the museum has seen controversy. On its opening in May 2008, the first exhibit was the work “Zuerst die Füße” by the German artist Martin Kippenberger – a “living sculpture” of a drunken tramp sleeping on a bean bag. Only after winning the Turner Prize did it become apparent that the original work consisted of only the bean bag.