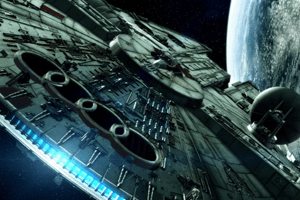 It might be cramped, but you can always pop your dog on the passenger seat.

Fans of the much-anticipated ‘Star Wars – The Force Awakens’ have reacted angrily to the Millennium Falcon being branded an Audi.

With spiralling costs and an increase in video piracy, Disney claim they were ‘forced’ to seek income from the dark side.

“Product placement has been criticised in the past, but Audi is a natural brand to complement the Star Wars product”, said Disney’s Bob Taeft. “They chose the Millennium Falcon because it’s grey, doesn’t have indicators, but can do the Kessel run on half a tank of unleaded.”

The Volkswagen-Audi group will feature heavily in the new film; C3-PO and R2-D2 will both feature discrete VW badges.

Other brands in the family will also make an appearance: Darth Vader is expected to pilot a bespoke Tie Fighter built by Bentley.

But VAG won’t have it all their way: the hero of the film will drive an X-Wing built by their arch rivals.

“It’ll be an iconic moment in cinema”, claimed Taeft. “The Federation are cutting up Jedis left, right and centre. But just as it looks like all is lost, OB-1 mutters the immortal words:

Comments Off on Outrage at Star Wars Audi product placement