Osborne says lazy poor should eat their own babies 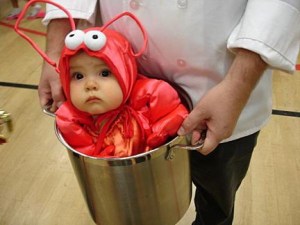 UK Chancellor George Osborne says it is about time lazy poor people ate their own babies, rather than relying on Tories to do it for them.

“For far too long, hard-working Tories have had to shoulder the baby-eating responsibilities” said Osborne as he feasted on a Bolton toddler’s succulent thigh.

“Dave, Iain, and I have even started having baby smoothies for breakfast, but it’s hard to make a dent on what seems like an almost unlimited supply of poor children.”

Osborne said if poor people ate their own babies, they would learn self-reliance, the value of hard work, and discover just how tasty babies are with proper seasoning and a glass or two of Pimms.

Prime Minister David Cameron welcomed Osborne’s modest proposal but emphasised there was no room for complacency.

“Just this morning outside Downing Street there was a group of disabled people in wheelchairs protesting against benefit cuts. I managed to push a few of them under a passing bus, but I can’t be expected to do everything myself.”