Call for the Hulk to be played by non-green actor 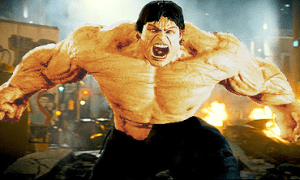 Following suggestions that the next Spider-Man should be played by a black actor, popular demand is growing for Marvel to break another tradition and finally allow the Hulk to be played by a non-green performer.

The Hulk has always been depicted as green in movies, the TV show and the original comics, but that may change in the new era of superhero correctness.

“Surely it’s time to bring the Hulk into the 21st century and admit that the colour of his skin is irrelevant,” insisted Albert Renfrew from the National Association for the Advancement of White People. “The Hulk is a great character, we love him, but we think he could just as well be a ‘person of white’.”

“Here in the NAAWP we have nothing against greens, but they are already hugely over-represented in the film industry. Just look at the Muppet movies.”

“Green Hornet, Green Lantern, the list goes on. There was never a Soylent White, was there? Actually, I’m not sure, was there?”

“We’re not paranoid,” he continued, “but ‘The White Mile?’, ‘Fried White Tomatoes?’ You have to ask yourself why not.”

Arthur Cardo from the National Association for the Advancement of Green People disagreed, saying: “The Hulk has to be green, it’s kind of the point, for Shrek’s sake! He’s green! You know, green, like in Hulk, green? And more to the point, he’s our only member, since the Jolly Giant hit the skids.”

Many movie buffs are insisting that regardless of political sensibilities, characters should always be played as originally depicted. No-one wants a repeat of the fiasco of last year’s Lassie reboot, when the faithful hound was played disastrously by Johnny Depp. Although many still believed that this role was a lot more convincing than Depp’s take on Tonto in The Lone Ranger.