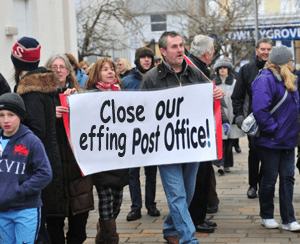 A post office in Harold is under imminent threat of closure – at least if the neighbours have their say.

Long a magnet to fat, sweet-craving children and people with inconclusively sized envelopes, the post office has been a thorn in the side of the local community for years.

“Some days, you can’t move for the queue of two or three pensioners bickering over who’s knees hurt the most”, complained farmer Dave Evans. “I have to threaten them with a muck thrower just to get to the e-cig shop.”

A detached dwelling with three bedrooms, the post office is located centrally in the village: a village with precious little housing for young families.

“That’s why it should become an estate agents”, said Evans. “They could then sell the post box to a bunch of twats from London. Once they’ve moved in, I can sell them organic sausages for 30 quid each.”

A stream of red vans has been photographed arriving at the post office: uniformed sociopaths then leave, with sacks full of junk mail.

“At first we thought they were drug dealers, but PC Flegg said they never delivered anything incriminating”, Evans explained. “Other than annoying red cards that complain you were ‘out’.”

Post mistress Nigella Bunting insisted they were an important hub for the community, and vowed to continue being closed at the times when you can actually shop there.

“We offer a valuable service: the internet can’t f**k up your passport application or pretend that a letter is a small parcel like we can”, said Bunting.

“We offer a personal service, particularly if you have a big nose or fat legs.”

Comments Off on Villagers campaign to close local post office