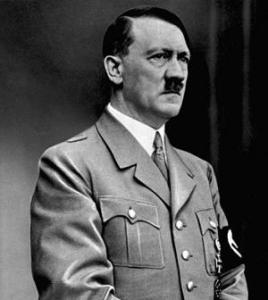 A real threat on the right wing

Oldham Athletic are considering pulling out of a controversial move for former leader of the German Nazi Party, Adolf Hitler, after 20,000 people signed an online petition opposing the deal.

The man who was Führer of Germany was set to be cloned on Monday and train with the club ahead of signing a long-term contract, but the public opposition may now force a dramatic U-turn.

“We are a bit short of quality down the flanks and, as one of history’s greatest ever right-wingers, we felt he would be a good fit for us.”, explained Oldham chairman Simon Corney, who feels all people should be given a second chance.

“We have to do the right thing for the club as a whole but also for the team on the pitch. We want a good cup run and are not content with reaching the semis, Hitler could really give us that extra push and be our final solution.”

Corney feels that the man responsible for murdering millions of Jewish people has served his time by being dead for almost seventy years, but PFA chief Gordon Taylor will not support the move and an emergency board meeting will be held today to discuss the deal with a decision and announcement due on Tuesday.

It is thought that commercial pressures and the threat of sponsors walking away from the club will mean it does not go ahead. A proposed joint sponsorship deal with Virgin trains and Butlins holiday camps has already fallen through after news of the deal broke.