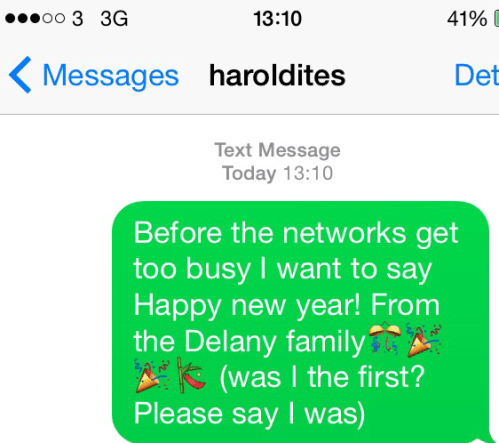 The first text wishing people a happy New Year for 2015 was sent today in a bid to ‘avoid the busy networks’ on New Year’s Eve.

Since the invention of the text message as a way to avoid talking to people, the battle to get New Year’s texts through before anyone else has intensified with well-wishers sending them earlier and earlier to avoid the message being delayed and not being received until 12:30am or even 1:00am.

The text was sent by Harold resident Pippa Delaney to all her friends, family, acquaintances and random numbers in her phone she must have had for something.

“Last year I sent them on Boxing Day, but I think that with the networks apparently being busier around the 1st of January than at any time of the year I thought I’d send this one now, to avoid the rush.”

When asked why she didn’t just wait and send them later on New Year’s Day she said: “I could, I suppose, but I would hate to think people’s New Year’s Eve parties were dampened because they thought I hadn’t wished them a happy one.

“That and I like to be the first person to do these celebratory gestures. Here, have an Easter egg.”