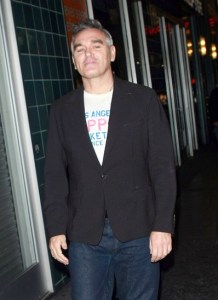 Morrissey sneaking to the shops to buy bacon

Controversial pop icon and vegetarian activist Morrissey admits he likes bacon, and says he not only has regular fry-ups for breakfast but also the occasional bacon buttie for lunch.

Morrissey made the startling admission backstage after his recent sell-out (in the number of seats sold sense) concert at O2 Arena.

“People are always asking vegetarians how we can live without bacon, well the truth is we can’t” confessed Morrissey. “It’s so f**king tasty. If Johnny Marr was made entirely of bacon, I’d never have left the Smiths.”

Morrissey said he never sought to mislead anyone, and true fans would surely have noticed there was no mention of bacon anywhere in the “Meat is Murder” lyrics.

“I talked about ‘the calf you carve with a smile’ and ‘the turkey you festively slice’ but said nothing about bacon. In fact I’ve only ever had positive things to say about bacon” said Morrissey.

“‘How Soon is Now’ is actually about craving bacon, ‘Panic’ was inspired by a day when I suddenly realised there was no bacon in the fridge, and ‘The Queen is Dead’ is also a dark, somewhat twisted ode to bacon.”

Morrissey also opened up about other areas of his life, including the vexed question of his sexuality.

“At various stages of my life I’ve been gay, straight, and I’ve had long periods of celibacy. But these are just labels – I’d sleep with absolutely anyone as long as they cook me a fry-up of bacon in the morning.”

Comments Off on Morrissey admits he likes bacon