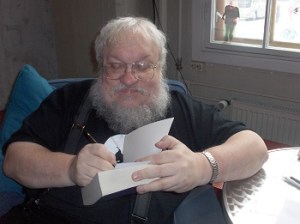 Game of Thrones author George R R Martin announced today that the long-awaited next novel in the series will be available much earlier than anticipated, as he is going to write the whole thing during National Novel Writing Month this November.

This marks something of a change in writing style for Martin, given that he usually takes up to ten years to complete a novel.

When asked to explain his reasons for upping the pace so dramatically, Martin confessed that after several years of pretending, he has still not actually written a word of the next book, and sees ‘NaNoWriMo’ as his last chance.

“I can’t cope with all the lies anymore,” he confessed. “I’ve been doing all these interviews saying how well it’s going and let me finish at my own pace – haven’t written a bloody word. This novel writing month gives me a chance to catch up. Big month, bang it out, bish bash bosh.”

When asked if he would be able to be able to produce a work of similar length to previous volumes, he conceded that this was unlikely.

“If that works, I’ll probably carry on and knock out the last two before Christmas,” he explained. “Then I can finally catch up with all the television I’ve been meaning to watch.”

“I’ve still got the last series of Sex and the City to go, I can’t wait to find out if Carrie and Big get together!”