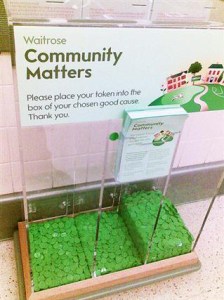 Charities helped by shoppers from the supermarket Waitrose have written to the company to ask them to stop sending donations as they “now have more than enough green plastic tokens to be getting on with.”

The scheme run by the supermarket sees shoppers swap the guilt of paying £15 for a bunch of six organic, corn-fed bananas, ripened in the armpits of a small foreign child, for the chance to donate green tokens to the charity of their choice as part of their ‘community matters’ initiative.

In an open letter to Waitrose the charities say the last thing they want to do is appear ungrateful, but point out there are only so many things you can so with green plastic tokens.

“It’s very generous of them to keep donating them to us but the only place we found you can use them is in the bumper cars at the fair,” explained one of the signatories.

“It may sound like fun but it’s not that great for us, a charity supporting people with brittle bones disease.”

Age Concern, another of the charities, say they initially found them very useful but after eight years of donations there is very little use for the tokens now every old people’s home in the country is fully stocked with green tiddlywinks.

Waitrose managing director Mark Price has acknowledged the letter, but says his company remain fully behind the scheme and intend to carry on donating the green tokens for many years to come.

“We appreciate not everyone will have a use for them, but we have had real success helping the poor,” he told us defiantly.

“The tokens can be used instead of pound coin to release a trolley at Lidl.”