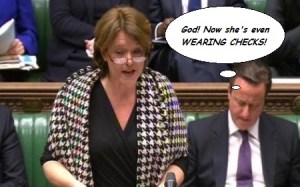 An expert from Sotheby’s has confirmed that a medieval-looking manuscript he found in the kitchen of a vegetarian restaurant in Harold is an authentic Chaucerian artefact from the mid-fourteenth century.

Restaurant owner Pippa Delaney was incredulous on hearing the news. “I can’t believe how long I’ve been saying I must sort out that kitchen drawer,” she said.

“Quaint little villages like Harold are full of priceless gems from yesteryear, tucked away in cupboards and attics,” said the Sotheby’s expert. “I just had a gut feeling in Veggie! Veggie! Veggie! although that may have been the lentil and three-bean soup.”

“Well, thank goodness he asked for a rummage in my drawers,” said Pippa, “I would have put that smelly scrap of paper in the bin for sure. The mustiness was bad enough, but the handwriting and spelling were a disgrace.”

The particular manuscript has been identified as an early draft of The Miller’s Tale, the second of The Canterbury Tales. The text is reproduced here with Ms Delaney’s permission, kindly translated into modern English for the Evening Harold by resident thespian Digby Burns.

Mistress Miller, Lady of Culture,
Claimed expenses, the greedy vulture;
Never by accident, only design,
She signed along the dotted line;
Her Right to claim she said was Divine,
“And that is why I won’t resign.”

Comfort in property the Lady sought:
Many fine houses the Lady bought;
“They’re bloody expensive!” she said with a curse,
Then took it all back from the Public Purse.
Enjoying a bottle of excellent wine,
She said “I so love money, I’ll make it all mine.”

The Lady’s boss saw ‘nothing wrong’
But the public made a fine ding dong;
For the public’s most astute perception
Wasn’t of ‘honesty’ but ‘deception’:
Public theft’s a crime most heinous,
But all she said was “Kiss my anus.”