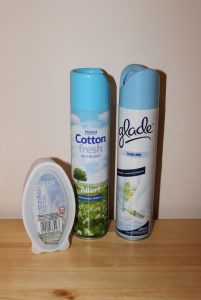 They contain dangerous toxins and absolutely NO fresh air.

Harold inventor Simon Delaney’s new household sprays have brought a ‘breath of fresh air into our homes’.  That’s the verdict on Simon’s new range of pork-based air fresheners given by workers at Dunstable Cotton Laundry.

“I work all day in an atmosphere of freshly-laundered cotton,” said Marge Pellet, “so the last thing I need when I get home is to find my husband has sprayed the entire bungalow with Tesco’s Cotton Fresh air spray.  Men, eh?”

But Delaney’s new Frying Rindless Back Rashers flavour air freshener has brought Marge a new sense of joy when she returns from work and may even have saved her marriage.  “I used to linger outside, picking up twigs and straightening the bins, but now I catch that distinctive whiff of a bacon butty coming down the path and I can’t wait to get indoors and sink my teeth into something meaty,” she said.

“The secret of my recipes is that I do not rely on synthetic flavourings,” Simon Delaney told the Evening Harold.  “All my sprays are made from authentic pig and genuine pork by-products.”  He wasn’t prepared to divulge trade secrets, but explained in general terms that he captures the fatty spray of sizzling bacon coming off the frying pan, then distils it down to create a gooey substance, which he says is ‘the very essence of the perfectly fried rasher’.

Mr Delaney has not, however, been content to limit himself to local sales and after a relentless marketing drive in Europe has won an order for his bacon flavour spray from a group of lumberjacks in Norway.

“After a hard day’s logging in the mentholated atmosphere of a mountain pine forest,” said Bjorn Bork, “the last thing I need is to get back to my cabin and find Liana has sprayed Tesco’s Pine Fresh air freshener all over the bedroom.  But Delaney’s Sizzling Bacon spray really gets my juices flowing.”

“It was a tricky compromise to get it right for the pine fellers,” said Delaney.  “Obviously, I couldn’t use Danish bacon but they do like quality in Norway, so I made a special version using 97% pork from free-roaming outdoor-bred UK pigs and came up with my premium range, Smell the Difference.”

Even Simon’s mother Pippa, who runs the village vegetarian restaurant Veggie Veggie Veggie, said there was a noticeable increase in the number of customers when Simon was testing his bacon sprays in the restaurant.  “Of course, we had to tell them it was Quorn,” said Pippa, “you know, for ethical reasons.”

Simon added that he does have a vegetarian air freshener option available.  “I do one in an organic lentil and three bean wind flavour.  It’s not to everyone’s taste but it is quite popular among the vegan community.  It’s called The Smell of Satisfaction.”