Olympics over for Rover: Stray dogs executed in Sochi after Putin sees one “being a bit gay” 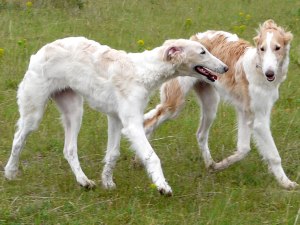 Dimitri and Vyacheslav’s is a forbidden love

Vladimir Putin has personally ordered that thousands of stray dogs be exterminated in and around Sochi before the Winter Olympics begin after spotting one “being a bit gay” on an inspection of Fishst Olympic Stadium.

“The President was enjoying his visit to the site,” explained presidential aide Elena Pavlovna. “He paid great attention to the well-muscled and bare-chested construction workers then met some male athletes as they took a communal shower after practise. Sadly the trip was ruined when out of the corner of his eye President Putin saw a stray dog being a bit gay.”

“You could tell by the way it used its walk it wasn’t a bitch’s dog and with no time to talk another dog mounted it. Several of us tried to calm President Putin down by telling him that the first dog was blind and the second dog was pushing him home but he was not convinced and insisted that all stray dogs be immediately killed.”

“I’m proud to have been awarded the dog termination contract,” said Alexei Sorokin, director general of Basya Services, many of whose employees are currently running around Sochi with baseball bats, sausages and a mad glint in their eyes. “Two dogs were caught being all husband together inside the Fishst stadium. God forbid something like this happens at the actual opening ceremony as that’s the last occasion one wants passion and happiness.”

Meanwhile fears grow for the children of Sochi who must be having a hell of a time surrounded as they are by gays and gay dogs. Rumours that Bono is planning on releasing a benefit single for the children remain horrible but unconfirmed.

Comments Off on Olympics over for Rover: Stray dogs executed in Sochi after Putin sees one “being a bit gay”