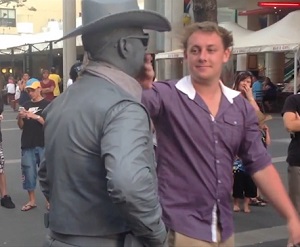 Check your busker is NFC-enabled before rubbing a phone on their face.

A technology firm in Dunstable is bringing street musicians into the 21st century, allowing the public to pay them by simply swiping a mobile phone against their face.

The firm Vizcorps has pioneered an operation to emplant a ‘near field chip’ under the skin of a busker. It’s relatively painless if the performer ticks the ‘anaesthetic’ option and the procedure can be paid for using Google Wallet, Zapp or PayPal.

‘I used to find all the loose change awfully inconvenient’, said ‘living statue’ Brian Grisham. ‘And besides, so few people carry actual cash these days. In the past, it was traditional to collect tips in an upturned tweed cap. But that’s outdated, fewer and fewer of us these days are accepting payment by checks.’

Grisham opted for the surgery so he could appeal to a younger, gadget-savvy audience who might want to give money to a man for standing relatively still.

‘Contactless payments are very much in their infancy at the moment, it will take the public a while to get used to them’, revealed Grisham. ‘Being a ‘mime act’ means its hard for me to explain how to give me credit, but only a few people have attempted to swipe their debit cards between my buttocks.’

If the trial of face chips goes well Vizcorps hopes to expand it to other customers, including tour guides, lap dancers and tramps.

‘There’s an obvious synergy between our chips and certain professions’, explained Vizcorps manager Hayley Beecham. ‘For instance, who wouldn’t want to use their phone to bang a taxi driver on the back of the head?’

‘But for us, it’s the tramp market that really excites us. When you’re giving money to a urine-drenched vagrant, you want it to be as contactless as possible.’