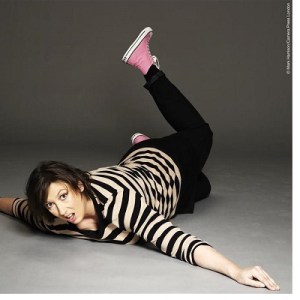 After over a century of using exactly the same jokes in Christmas crackers, Chinese manufacturers have hired comedienne Miranda Hart to provide new jokes. In keeping with her TV series, all the jokes are visual and feature pictures of Miranda falling over, making funny faces, and being involved in amusing misunderstandings.

A spokesmen for the Chinese companies said that traditional Christmas cracker jokes were suitable for ages 7 to 77, but only 7 year olds and 77 year olds actually found them hilarious. This was entirely deliberate as anything too funny at a Christmas dinner could be a choking hazard. By replacing the traditional jokes with Miranda jokes, the Chinese again hope to avoid messy lawsuits.

The new Miranda Christmas cracker jokes were test-marketed on residents of the sleepy village of Harold.

Pippa Delaney said she couldn’t help cracking a wry smile when opening her Christmas cracker to find a picture of Miranda falling over. “Large women falling over are always mildly amusing and Miranda was making a funny face as well. Importantly, I could still eat my chicken drumstick without it getting lodged in my windpipe.”

Other residents said it was such fun that when the crackers were pulled they made an ‘oooooo’ sound rather than the traditional ‘bang’.

Elsie Duggan laughed out loud at her cracker which featured a picture of Miranda entwined with a large billy-goat, but the Chinese quickly explained that the picture was the result of an amusing misunderstanding at the Shanghai printers and they apologised for the unintended humour.

The Evening Harold rather nervously approached Ms Hart for comment only to find her surprisingly upbeat.

“My cracker jokes are like my TV series – they raise a smile, are accessible to all, and make me a good living. It’s very easy to be edgy when you are working for free at a small village newspaper. Just joking guys – I love what the Evening Harold has been doing over the last 8 or so months. You are good, not TV good of course, but I’ve liked your Facebook page and encourage everyone else to as well.”

The Evening Harold are very grateful for Miranda’s endorsement, and in turn remind readers that Miranda has released a comedy workout DVD which we recommend as an ideal Christmas gift to give to fat relatives.