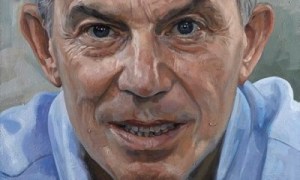 Have you seen this man?

Interpol have commissioned a terrifying portrait of notorious war criminal Tony Blair and placed it in the National Portrait Gallery in a last ditch attempt to bring him to justice.

European Interpol chief Claude Reinmens said the search for Blair had gone cold and they needed the public’s help. “We have searched all the obvious places, Blair’s 9 houses, oil company headquarters, and Wendi Deng’s bedroom. We even searched the International Criminal Court in the Hague, but they hadn’t seen him either.”

Reinmens warns the public to be careful about approaching Blair, especially if they have a full tank of petrol. “Blair is known to invade at a moment’s notice, and the slightest whiff of oil, or Gordon Brown’s cheap aftershave, can set him off. Whatever you do, don’t try to bluff him saying you have guns or other weapons as that just makes him more angry.”

Long-time Blair ally George W Bush condemned the oil portrait saying that if oil keeps getting wasted on trivial things such as paintings, there would be none left for aircraft carriers and it could become difficult to invade more countries for oil.

Somewhat ironically, long-time Blair opponents agree with Bush’s criticism of the choice of medium for the portrait.

“They should have painted him in Teflon.”