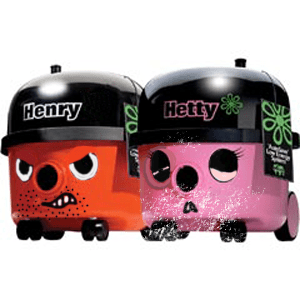 Henry has been accused of landing a sucker punch.

Well-known cleaning couple, Henry and Hetty Numatic, have filed for divorce amid shocking new revelations about their private lives.  The new revelations follow the publication last week of an image showing Henry on the half-landing of their big house on the Dunstable Road with his electric cable wrapped round Hetty’s face.

“There was certainly a face-off,” said the editor of domestic servitude newsletter The Daily Maid.   “He looked like he was trying to strangle her and when they were pulled apart, Hetty’s face came off.  It took ages to snap it back on.”

Fortunately the damage was only cosmetic.  “It’s nothing a bit of plastic surgery can’t fix,” said Henry, dismissing the strangling allegation as nothing more than ‘a cable entanglement incident’.

But with others reading more into the situation, and in the interest of balanced news-reporting, The Daily Maid, which prides itself on digging up dirt, muck-raking and polishing off, gave both sides the chance to ‘slag each other off’ through its pages.

Henry immediately launched into an attack on Hetty, describing her as a ‘vacuous air-head who is literally falling apart’.  “She’s going to pieces.  Last week I saw her crawling round the kitchen floor, completely off her face, hoovering up a pile of white powder.  Flour, icing sugar, call it what you want, absolutely snorting it she was.  I guess that’s what they mean by ‘Class A efficiency rating’.  Just go check what she’s got in her bag.  On top of that, she started drinking.  What does she think she is?  A Wet’n’Dry Vax?”

But Hetty hit back, accusing Henry of making up stories to deflect attention away from his own sordid habits.  “I’ve seen him sticking his nozzle in some fairly unsavoury places,” she said, “he’s way past his prime, but still trying to pull girls half his age, slags too, by the look of them.  He is sad.”

Henry again retaliated, claiming he has been misrepresented.   “I was just hangin’ wi’ me hose,” he insisted.  “Hetty should do everyone a favour and book herself into re-furb for a few weeks.  If they can wire her up the other way, she might get a job as a hand-drier in a public toilet.”

He said he’d had enough and has now crossed the channel via eBay with a new identity as ‘suave domestique, Monsieur Henri Pneumatique’ to start a fresh life in the Montparnasse district of Paris.

“He’s a dirty old dustbag and a sucker for a bit of French fluff, so good riddance,” said Hetty, who has recently been seen in the company of Henry’s ‘rather handsome’ replacement.  “I don’t even know the new boy’s name yet,” she said excitedly, “but he’s gorgeous looking.  I think he’s Welsh and he’s definitely bagless.  He said he’s Dai’s son and he’s a uni-ball model with a fully-rotating head.  Wicked.”

Henri has since written to the editor of The Daily Maid complaining about an advert for Siemens stain-removal equipment next to the article.  “They’re just using us for blatant advertising of alternative makes of vacuum cleaner,” he said.  “If you want to know what really sucks, it’s the British press.”

Comments Off on Henry and Hetty Numatic in acrimonious split