Please don’t name me either, says Australian cricket captain [EDIT: And most of England team] 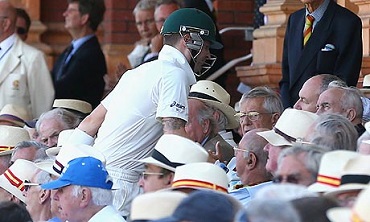 Michael Clarke in typical pose, heading back to pavilion

Following a newspaper’s proposal to discourage England bowler Stuart Broad by not naming him, the Australian cricket captain Michael Clarke has made a heartfelt plea not to be named either, after a disastrous performance on day one of the Ashes.

The Brisbane Courier-Mail, after apparently being taken over by a consortium of six-year-olds, put the unusually grown-up plan on its front page yesterday. The perhaps hasty reasoning being that maverick bowler Broad thrives on aggression, and therefore could be neutralised by never speaking his name. Not for nothing is the city of Brisbane known as a centre of philosophy and logical thinking.

Happily for England, Broad is not the bad wizard from Harry Potter and so immediately reacted by taking an impressive haul of five wickets, leaving the Courrier-Mail’s cricket correspondent with something of a problem describing the first day’s passage of play.

For slightly different reasons, the captain of Australia has begged also not to be named, just on the off chance that there might be a few people in the continent who don’t know who he is, and might therefore not laugh at his atrocious performance with the bat. Cornered unexpectedly by autograph hunters during the tea interval, he was forced to respond by signing his name variously as “Ricky Ponting”, “W.G. Grace” and “Bill Oddie” in a desperate attempt to put observers off the scent.

The captain had most of the day off after only batting for a few seconds in the morning, and was observed in the pavilion trying his hardest to grow a beard, the better to hide his appearance. Rumours are already flying that the Australian top order will bat their second innings in camouflage rather than the traditional white, in a further attempt not to be noticed.

In a far cry from the days when Shane Warne would wear aggressive war paint sunscreen, the elite Australian players have been asking for their sun block tomorrow in ‘more pastel shades, to help us blend in a bit.”

[Edit: And most of the England team. Sigh.]

Comments Off on Please don’t name me either, says Australian cricket captain [EDIT: And most of England team]

Filed under Lost and Found, Sport