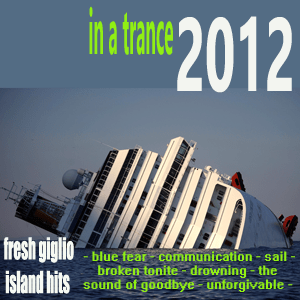 Captain Schettino raised the alarm by posting this picture on Facebook

A late 20th Century trance CD recovered from the Costa Concordia has been sold at auction for a little over its reserve.

The album is rumoured to have belonged to Captain Francesco Schettino himself, it’s thought he played it to keep himself calm as he watched his ship slowly sink.

Auction house Sotheby’s were keen to emphasise the outstanding condition of the piece, which had no signs of water damage and all the little plastic teeth still in the middle.

Julie Carmichael explained that the remarkable state of preservation was one of the reasons it fetched nearly a tenner. She thinks that’s down to the Captain’s selfless bid to save the collection of house hits, before abandoning his ship almost before the alarms sounded.

Carmichael described why this was such an important piece.

“When you play this compilation back through a period-correct CD Walkman, you can visualise the Captain a few hundred yards away from the scene, swaying gently to the tunes as he looks bravely in the opposite direction. The choice of music is also interesting, some might have thought he would have saved his Italian Speed House compilation. But we think that was still in the ship’s PA system, to drown out the sound of hull against rock.”

Following the success of the auction Sotheby’s hope to sell other Concordia artifacts soon. “Obviously we’re not going to plunder the ship, that would be rather tasteless”, admitted Carmichael.

“The rest of the stuff was found in the Captain’s shoulder bag, which he rescued before the women and children. The bag’s quite well preserved too, but it does smell faintly of wee.”

The second auction will take place in just over a month’s time. The items offered included a mirror ball, a thick pair of reading glasses, a grass skirt, three glow sticks and a 15th century maritime chart.

Captain Schettino wasn’t surprised that the CD sold so easily. “It was one of my favourites”, he said. “It was always the first to leave the rack.”

Comments Off on Costa Concordia trance CD sold for €9.50