David Beckham delighted to be new Doctor Who 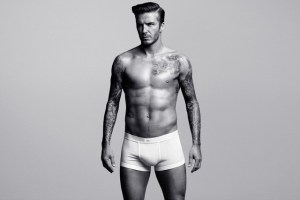 The Doctor’s new less-elaborate costume is going to result in some horrific cosplay.

David Beckham has spoken of his delight on being chosen to be the twelfth Doctor Who.

“I am well pleased,” he said. “It was a bit hard to keep it a secret but Victoria wasn’t that bothered. She doesn’t watch science telly, finds it a bit too deep.”

Despite the Doctor being a huge role for any actor let alone one without formal training in his first professional job Beckham is confident he can excel.

“There’s lots of running about after aliens and that and I’m a good runner,” he said.

However there is one aspect of being Doctor Who that he is less sure of.

“I don’t know if I’ll be good at being super-clever,” Beckham admitted. “The Doctor has a good vocub, vokerb, he know loads of words and I’m not good at that. But the producer said ‘well done’ when I mentioned I can design my own pants.”

Show-runner Stephen Moffat has said that the new series of Doctor Who will be tailored to Beckham’s strengths.

“In some ways it’s a little more simplistic,” he said. “For David’s sake we’ve done away with the ambiguities and the clever names however that slight loss paves the way for huge gains and we are sure that viewers will love watching the Doctor take on enemies like the Big Grumpy Metal Aliens and the Zappy Aliens That Look Like A Bin and using his sonic football to get out of danger.”

“I’m looking forward to saving the world,” said Beckham. “Facing down the worst tyrants in the galaxy will be a piece of piss after all them years I spent with Sir Alex Ferguson.”

Comments Off on David Beckham delighted to be new Doctor Who