Village replaces NHS 111 number with talking to a gran 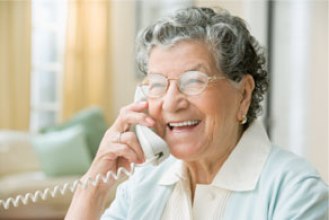 She doesn’t believe you accidentally fell on the vacuum cleaner nozzle either.

Amid concerns that the NHS’s 111 non-emergency helpline is inadequately staffed and unsafe the village of Harold has replaced it with a freephone number answered by Ruby Butler, 83.

“It’s the perfect system,” said local GP, Clive Evans. “A significant proportion of those who access the NHS are time wasters. Since Ruby’s become the gatekeeper they’ve vanished faster than an X Factor winner’s career.”

“My three-pronged approach to healthcare never fails,” Mrs Butler told us. “If someone says they’ve got depression I say that in my day there was no such thing  and to stop mardy arsing around and get some fresh air. If they don’t have any specific symptoms I recommend a nice cup of tea and a little sleep. And if they’ve hurt themselves I say ‘you’ve just shaken yourself up, give it a rub and get on’. What else does anyone need?”

“Ruby is saving us time and money,” said Dr Evans. “My only concern is that now she’s part of the system the government will attempt to stealth privatise her. I’ve shown her a picture of Jeremy Hunt and while not a violent women Ruby has promised me that she’ll knee him in right in the private healthcare initiatives if ever he gets too close.”

Filed under Around Harold, Health, News