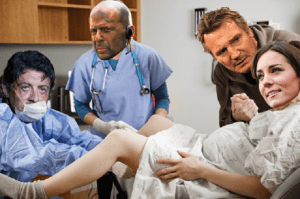 The nail-biting wait for the Duchess of Cambridge’s baby has proven too much for a a rag-tag bunch of mavericks, who have sworn to “go in there and get that damn baby out, or die in the attempt”.

Bruce Willis, Liam Neeson and Sylvester Stallone announced at a press conference this morning that they “were not prepared to sit here doing nothing any longer”, and are therefore planning an immediate raid into the inner depths of the royal womb to get the baby out, “whatever it takes”.

“Don’t try and stop us,” insisted Willis to horrified journalists, “We’re going in. And we don’t care how messy it gets. Yippee-ki-yay, Mother.”

Medical experts insisting that the pregnancy should be allowed to run its natural course were dismissed as “typical commie liberal do-nothing handwringers” by Willis, who pointed out that this was exactly the kind of nay-saying objection he experienced before his mission against a gigantic asteroid in the movie Armageddon.

Stallone was just as quick to overrule any suggestion that it might be tricky for three beefy men to gain entrance to Kate’s vagina, not least when tooled up with the impressive array of ropes, spotlights and specialist diving equipment they are planning to use.

“It’s just, you know, we’re gonna get in there, whatever it takes,” he mumbled to ear-straining reporters. “There’s a, you know, baby in there, and someone’s gotta go in. I had to get past four giant metal fans in an air vent to get into New York’s Holland Tunnel and rescue those people in my movie Daylight, this is just the same. Kinda.”

Liam Neeson agreed. “I’d be the last person to call myself an obstetrician, but I know my way around a front bottom,” he insisted. “Those bastards have got that poor girl trapped in there, and I’d like to see anyone try and stop us getting her back.” He remained undaunted by the news that there were no actual terrorists inside the Duchess of Cambridge, and there was only a 50% chance that the baby was actually a girl.

The press conference was unexpectedly disturbed by the arrival of Burt Reynolds, furious at not being allowed to join the mission. “It’s crazy!” he stormed to the tune of Duelling Banjos. “I’m the only one here who’s actually been in a movie that’s in any way relevant to this situation!”

When asked to explain, he shouted: “It’s obvious, for God’s sake! Smokey and the Bandit!”