Police replace ‘Stop and Search’ with ‘Tap and Tickle’. 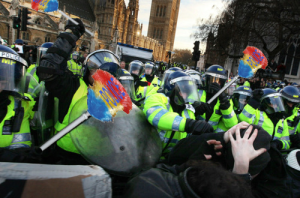 Following successful trials by Harold’s Police Force, the rest of the UK’s police forces have agreed to replace their ‘Stop and Search’ policy with the forward thinking ‘Tap and Tickle’. The new method uses a mixture of a surprising tap on the shoulder, followed by a lengthy tickle to extract information about crime.

“I initially came up with the idea after I tickled my daughter to the point where she surrendered the remote control”, PC Flegg, the officer responsible for the new ‘non-violent’ approach told the launch press conference.

“After that first successful deployment of the tactic, I continued to use it to extract information about her day at school, what her friends had been up to, and how to delete browsing history on the laptop. Not only did she give me all the information I was after, but she laughed hysterically in the process, something she never did when I used the Tazer”.

‘Tap and Tickle’ has been used on a trial basis in Harold and has seen some surprising results. One well-known offender told the judge at his recent trial ‘no matter how much I tried not to, I just had to tell the officer the exact address of the house I had just robbed. I couldn’t stop laughing as the 2 Policemen got to work under my armpits”. Worryingly, he continued on to reveal that it was the first time he had been ‘arrested with an erection’.

Despite the overall success of the trial, police forces have decided to stick to ‘traditional’ tactics in certain circumstances. This follows Avon and Somerset police’s announcement they saw a ten-fold increase in arrests at the recent Bristol Pride march.

Comments Off on Police replace ‘Stop and Search’ with ‘Tap and Tickle’.