Crock of Gold was a Crock of Disappointment. 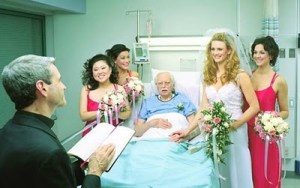 Lula-Belle is currently on vacation in the Maldives.

After the death of local businessman Brendon McDonald in March of this year, many villagers assumed that his estate would bequeath the bulk of Mr McDonald’s wealth to his son and daughter-in-law, but details of his will published today tell a very different story.

In his will, Mr McDonald repeatedly refers to his daughter-in-law of 36 years as ‘A gold digging tart’, who, he claimed, ‘only married my feckless, gullible son for his future wealth’. Close friends of McDonald confirm that he died unshaken in his belief that his son’s wife was little more than a cheap floozie who had nothing better to do in life that wait for her husband’s inheritance.

In response, Mrs McDonald’s press-officer issued a sharply-worded statement, pointing out that: “Mrs McDonald is CEO of a world renowned business empire which she built from the small enterprise she inherited from her own mother.  She is currently fourth on the Sunday Times Rich List, slightly ahead of the Queen in wealth, and for the late Mr McDonald to suggest that she married for money is pretty much what you’d expect from a constipated old twat who’s never forgiven her for slapping his hand off her arse during a frankly unwelcome dance at the wedding reception.”

A close friend of Mrs McDonald who wishes to remain anonymous told us, “For that cantankerous git to try to claim that Henrietta was a gold digger is downright ridiculous.  Despite she and Georgie having been together for more than 40 years, with three children and seven grandchildren to show for it, old McDonald consistently and deliberately refused to consider her part of the family, frequently excluding her from family get togethers and trying to belittle her business acumen.”

Henrietta’s friend continued,  “If it hadn’t been for her bailing him out, his own business would have gone down the tubes several times over the years.  For a self-made man to look down his nose at Henni just because she chose to attend the local Grammar school rather than be a boarder is pathetic.  Everyone knows that she chose to stay at home to help out in the family dressmakers and haberdashers so that she could continue to secretly see Georgie.”

Mr McDonald’s £1.3 m fortune will instead be inherited by his second wife, a twenty two year old American ‘exotic dancer’ named Lula-Belle who he met on a world cruise in 2012.

Comments Off on Crock of Gold was a Crock of Disappointment.