Travel agent to start asking about your next haircut 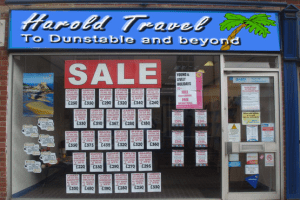 A travel agent in Harold has left customers confused by their new approach to customer services, killing the quiet moments by asking inane questions.

‘The Salon Method’ as it has become known was started by Sally Bun, manager of Harold Travel. “During a recent wash and colour, my hairdresser asked me about my holiday” she explained.

“I told her I was going to Spain. This was the cue for her to spend the next half an hour telling me about how she had been to the same resort. She went there with her best friend and came back with Chlamydia. It was a great way to fill the awkward silence.”

Since then Ms Bun has been trying a similar technique in her store. David Jackson was one of the first customers to have ‘The Salon Method’ tried on him. “I was enquiring about a trip to Australia” he told us.

“The lady serving me said she would search her systems and it may take a couple of minutes. Then, out of nowhere, she asked ‘are you getting your hair cut this summer?’. I was a bit surprised but told her I was planning to have a short back and sides in the third week of June”

The initial success of the travel agent’s trial has seen other professionals take up ‘The Salon Method’. An officer from the Harold Police Force, PC Flegg has said she has used it during arrests.

“I chased this one guy on foot for 10 minutes. Eventually I got him to the ground and read him his rights. As we caught our breath I asked what he thought about the recent change in weather and the effect any potential hose pipe ban will have on him”.

She admitted that although it didn’t calm the man down, it did help her ‘forget to be racist’.