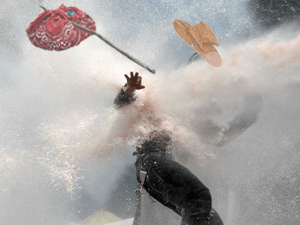 Tired of your tramp stinking?  Fed up of the stench of stale urine, Special Brew and BO? Had enough of your local vagabond being surrounded by their own cloud of flies?  Or worse, is your hobo’s aura showing signs of wear and tear? Then Mick Clarkson of Clarkson’s Cars has the answer!!

Following on from the success of his car wash and automated dog grooming businesses, Mick has launched another innovative service: high pressure Aromatherapy for Tramps.

Speaking exclusively to the Evening Harold, Mr Clarkson told us that the inspiration for his new venture came from the annual Trampfest, which sees hundreds of people who are strangers to soap descend upon the village.

“A few of them had been dossing down in the cars in my yard,” Mr Clarkson told us, “and even though I sprayed Febreze and hung a few pine air-fresheners in the motors, the smell lingered.  I figured that it might be more effective to tackle the problem at source. Plus the Aromatherapy oils can help them in other ways.  I’ve been told that. By a woman.”

The state-of-the art facility sees a ‘Containment Room’ where tramps have their outer garments removed by hypoallergenic robot arms, before being led through to the ‘Treatment Area’ by a Lurcher on a bit of string.  In this area, specific oils chosen and blended for each individual hobo are added to a high-pressure washer.

“We’ve done our research,” said Mick, “And we know that a combination of lobelia and thyme help counter addictions, while frankincense, chamomile, geranium and clary sage boost self-esteem.  We choose those which are most appropriate for each individual client, then increase the recommended amount by ten, and hose the bastards down.”

It is hoped that the relaxing benefits of the oils, combined with the high-intensity muscle-pounding of the pressure-washer will leave the tramps feeling clean and serene, and more pleasant for the rest of the village to be around.

The service was demonstrated for us by Harold’s own tramp, former stockbroker John Horse.  Mr Horse seemed to perk up quite considerably during his wash, with almost coherent expostulations being heard from him.  Following his ‘blast’ of heavily scented foam and water, Mr Horse was then led through to the ‘Drying Area’ where he was blown-dry by a renovated WWII Spitfire engine, before being handed some fresh clothes from charitable donors.

Mr Horse before, and shortly after

Mick Clarkson sees only one fly in his ointment; stiff competition from a group of  Lithuanian hand-aromatherapists.

“For a tenner, they’ll do a tramp inside and out”, explained Clarkson. “Although they do charge a bit more for a big one.”

Filed under Around Harold, Business, Technology